The Greenville Real Estate market is doing well with an almost 6 percent increase in the number of homes sold in November 2017 as compared to November 2016. The average sold price also saw an increase of 7.5 percent!

Growella.com used data from more than 70 public resources, and built an algorithm for Millennials that shows the best places to live nationwide. The algorithm ranked Greenville number 9 out of 100! Nice! View the entire article at Growella.com.

According to the report Housing Opportunities and Market Experience December 2017  by the National Association of REALTORS®, 72 percent of people across all age, income, and types of geographic locations believe that now is a good time to buy a home. Forty-three percent believe that strongly. This is a decrease from 48 percent in Q3 2017 and 45 percent in Q4 2016. 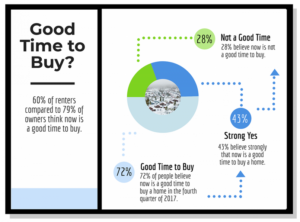 If you are not into reading long reports with statistics and graphics are your forte then follow this link: Home Survey for December 2017.

Realor.org also reports that nationally, “Existing-home sales surged for the third straight month in November and reached their strongest pace in almost 11 years. All major regions except for the West saw a significant hike in sales activity last month.”